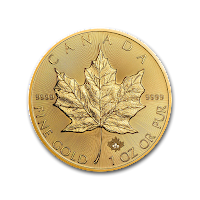 Issued since 1979, this coin is 24k pure gold to a fineness of .9999  It's available in five sizes: 1oz, 1/2oz, 1/4oz, 1/10oz and 1/20oz.
The Gold Maple Leaf is exceptionally popular and is traded all throughout the world.  Americans like them because Canada is a trusted neighbor and the coins are denominated in Dollars.  Being 24k pure gold, these coins are especially popular in the Orient as the Asians typically don't buy bullion coins that contain any alloy.   Starting in 2013, the Royal Canadian Mint implemented several anti-counterfeiting features in the Gold Maples.  The radial lines running throughout the background is notable, but also note the micro-printing of the issue year inside of the miniature maple leaf next to the large maple leaf.  Because the Maples are pure 24k gold, they are soft and should be kept in their protective sleeves to prevent scratching and maintain optimum resale value. 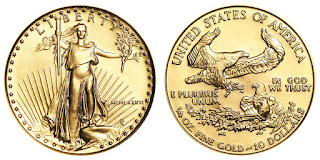 Issued since 1986, this coin is available in four sizes: 1oz, 1/2oz, 1/4oz and 1/10oz
Produced by the US Mint and backed by the US Government, the Gold Eagle is one of the best selling coins in the United States.  These coins contain their full measure of gold, plus a small amount of copper & silver alloy to make them more durable and scratch resistant.  (So, a 1oz size coin actually weighs 1.09 ounces: 1oz of gold plus .09oz alloy)
Minted in both standard Uncirculated strikes and Proof Collector Strikes, many of these coins from their early years have become collectible in the own right, and worth more than just their gold bullion value.   The coins issued from 1986 - 1991 had their date of issue stated in Roman Numerals to honor the 1907 High Relief Gold $20 coin where the Eagles got their design from.  The 1992 & later issues exhibit standard numerals for the issue year. 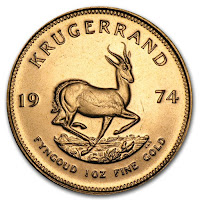 Well known throughout the world and even in American pop-culture, Gold Krugerrands have been featured in many movies & TV episodes as the treasure being chased.  First issued in the mid-1960's by South Africa, Gold Krugerrands were THE gold coin to have until they were dethroned in the mid-1980's by the US Gold Eagles.  Like the Eagles, the Krugerrands contain their full measure of gold, plus an additional alloy for durability & scratch resistance.  And like their competitors, they come in the standard 4 sizes:  1oz, 1/2oz, 1/4oz and 1/10oz. 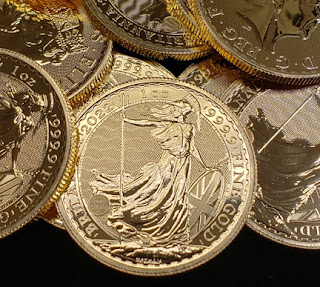 Great Britain has entered the gold bullion coin market with its version of their classic Lady Britannia design.  These coins are .9999 pure gold and are currently priced a little less than its American competitors. Like the Maple Leaf, the Britannia also utilizes modern anti-counterfeiting features and they come in the 4 most popular sizes. 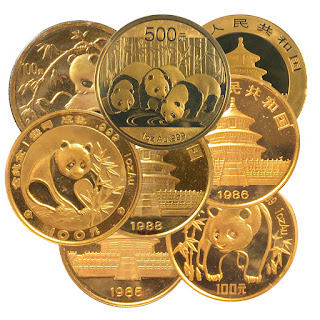 First issued in 1982, these coins feature an adorable Panda in a different pose each year.  Like the Maple Leaf coin, they are made of  pure 24k gold and are issued in 5 sizes: 1oz, 1/2oz, 1/4oz, 1/10oz and 1/20oz.   Please note, that as of the past few years, the Panda coins are now made in "Chinese standard" weights.  A Troy Ounce contains 31.1 Grams, but now the 1 ounce size is now made as a 30 Gram coin,  the 1/2 ounce now weighs 15 Grams, and so on.     Some earlier dates and sizes can be quite collectible and worth much more than gold value, but the new strange-weight issues are definitely less popular.  And they cost a little more than most of their competitors' coins do. 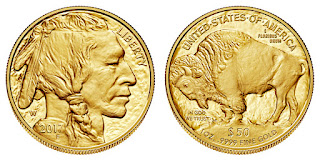 The newest American bullion coin on the block is the American 1oz Gold Buffalo Coin.  First issued in 2006, these coins are made of pure 24k gold. This bullion coin only comes in the 1 ounce size.  The Buffalo coin sells for approximately the same premium as the 1oz Gold Eagle coins, a couple percent higher than the Maple, Krugerrand, Britannia or Philharmonic.

Other countries issue Gold Bullion Coins as well.   Austrian Philharmonics, Australian Kangaroos,  and many more.  We can help with these also, please ask. 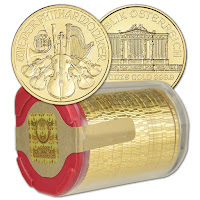 For up to the minute Spot Market price indications 24 hours a trading day, visit the metals page on our website:
http://www.nashvillecoin.com/metals.htm
bullion gold Metals nashville coin and currency