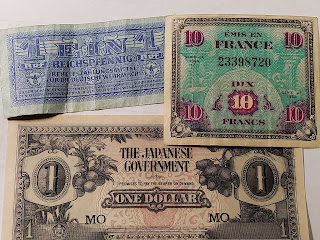 One of the more common questions we receive is about the value of World War 2 era European and Pacific Theater paper currency that our customers have run across as they go through the belongings of an older family member.  Usually, these notes were brought back to the States by soldiers returning from the war.

As the soldiers were clearing out buildings and towns in WW2, they often came across paper currency like French Francs and German Marks. By the time the war started, many of those bills were already obsolete, and no longer legal tender to spend, due to monetary changes or changes of governments. The original owners had kept them hoping they would one day have value again, much like people kept
Confederate currency after the Civil War ended, on the hopes that the South would rise again. Some, like the Philippines and nearby Pacific Islands, were issued by the Japanese because they thought they would control those islands indefinitely. When the Allied troops liberated the islands, those bills became worthless to spend and were kept as souvenirs.While some notes can be very collectible, many of these WW2 era bills now sell for only around 50 cents to $1 each as inexpensive reminders of that very historic time.

Like any collectible paper money you may come across, be sure to keep them flat and unfolded.  And never use glue or scotch tape on them as that will severely diminish any potential value they may have.