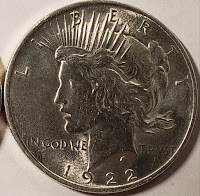 Peace Type Silver Dollars were produced from 1921 until 1935 at 3 US Mints: Philadelphia, Denver and San Francisco.  Some years had no silver dollars made, and 1921 dated Peace Dollars are considered scarce.  Dates most often seen are 1922 through 1926. 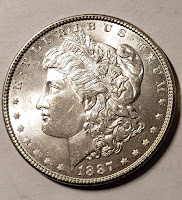 Morgan Silver Dollars were produced from 1878 until 1904, and then a hiatus with no dollars minted from 1905-1920, resuming again only for the year 1921.  The 1921's as a year are priced separately and priced less than the Pre-1921 dated coins.  Morgans were struck at 5 different US Mints: Philadelphia, San Francisco, New Orleans, Carson City Nevada and Denver (only 1921 made in Denver).

Cull Grade coins: these have a clear 4 digit date and no holes, but can have cleaning or polishing, scratches, gouges, rim dings, etc.

Average Circulated coins:  These have what's called "good honest wear", meaning they are not cleaned or damaged, and show varying amounts of basic circulation wear. All are basically attractive coins with good overall details and appearance.

Almost Uncirculated grade coins:  Full original details as minted, with only very minor circulation wear on the high points of the design. Will also exhibit original surface patina and mint luster in the protected areas.

Uncirculated (Mint Condition) grade coins:  Full original details just as the day they were minted. Has no wear from circulation of any kind. Will also exhibit original surface patina and mint luster throughout the coin. Note that Uncirculated coins have never been in circulation, but may exhibit small nicks and scratches called bagmarks, since they were bagged in 1,000 count bags by the US Mint.
bullion Silver Dollars